The Uganda Wildlife Education Centre (UWEC) together with all sectors for tourism in Uganda are deeply saddened to announce the death of Letaba, one of her male lions, aged 10years- that passed on yesterday on the 13th September 2019 at 9:00am.

How did Letaba Die? / What caused Letaba’s Death?

The Outreach Conservation Education Officer who led the team for this Conservation Education Program activity during the Empango celebrations of Toro Kingdom reported that on their way back from Fort portal at Kalenga village in Mubende district, the transport truck swerved off the road leading to the collision of animal crates. In the process, the lion escaped from his crate to a nearby community animal farm.

After the joint efforts, Letaba, was later on cited in the community on the 13th September 2019 at round 7:00am. However, the lion was highly charged and had already killed 3 pigs and injured 1 cow. The Veterinary Doctor tried to dart him but all in vain since he was already disturbed, dangerous and threatening human life. After several consultations from all concerned, a painful decision was made and this was to put him out of action at 9:00am. This is how he died.

Thereafter, Letaba’s corpse was transported back to the Uganda Wildlife Education Centre for postmortem. A detailed report of the postmortem will be made and shared with responsible authorities.

It is a very sad situation on the side of UWEC losing one of our iconic animal species and an ambassador of Conservation Education in Uganda. However, they appreciate the great collaboration of the Uganda police, UWA rangers, community leaders and members who greatly provided support in the tough operation. James Musinguzi thanks God that no human lives were lost in this incidence. 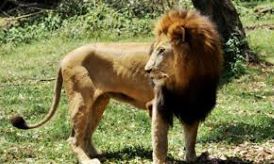 Named Letaba, the fallen hero’s named means “Happiness” in Zulu Language. Letaba was aged 10 at the time he passed on and he was the ambassador of the Conservation Education Program. It is reported that whenever it roared, you would think the clouds on the sky are preparing for rain to fall.

Letaba was donated to Uganda by the director of the South African Lion Park, Mr Mark Fynn, who was impressed with the work of UWEC. Letaba was six-year-old at the time of donation from South Africa sent to replace the deceased Kibonge who passed away last year at 18 years. Kibonge, who passed in November 2014, was Uganda’s oldest lion at the Centre and the only male at UWEC.

Letaba was valued at 35 million shillings was donated to the center to help it in breeding more lion species in the country to cater for the dwindling numbers.

Kibonge a Kenyan origin was donated to UWEC in 1999 after it was abandoned at Nairobi Park, where he was raised by the animal care givers until he made three years.

Letaba was donated in May 2014 before Kibonge passed on but the process of transporting him took long than expected. The problem was compounded when the Convention on International Trade in Endangered Species, CITES tightened the conditions for export of endangered species. However, both the Ugandan and South African authorities completed the process by February 2015 and put in motion the relocation process. Letaba, touched down at 2:00pm on Saturday afternoon aboard South Africa Airways and was handed over to the UWEC management shortly after.

James Musinguzi, the Executive Director UWEC reported that the arrival marked the new era in Lion conservation efforts. He testified that Uganda has less than four hundred lions then and the arrival of the male lion would help boost the numbers at the zoo, which can then be reintroduced in the wild.

UWEC unveiled Letaba following the death of Kibonge that died at the age of 18 in November 2014. The life span of lions is between 10 to 16 years.

Unveiling the heir of Kibonge sparked off blissful moments at the den as it was such an interesting moment and could easily attract one’s attention. The tourists who then were taking their safaris Uganda/ tours Uganda/ Uganda safaris took time to ably look at the new fierce heir Letaba who was acquired from safari packs in South Africa to join the three lionesses.

The huge, muscular and fierce 6 year old Letaba, surprised everyone as it rushed to befriend the lionesses. Letaba then established himself as the boss because he is strong enough and muscular. As soon as it was let out, it started guarding against the hyenas who are always the competitors of the lions by keeping them away while the lionesses where busy feeding, “he said.

Letaba’s consumption rate saying in a day it consumes 10 kilograms of meat unlike the lionesses which consume only 8 kilograms.

Jennifer Nandutu, the animal keeper and head of section for cats and hoof stocks reported that Letaba attracted a number of local and foreign tourists for tours in Uganda/ safaris in Uganda which greatly increases the revenue.

The Executive Director UWEC James Musinguzi explained they were seeking for 200 million shillings to set up a conservation center for animals in the cat family. Animals that make up the cat family include the lion, leopard, cheetah among others and are said to be the biggest tourist attractions world over. Letaba died as an ambassador of the Conservation Education Program.

Musinguzi said this was to help them establish a center that would provide more space for the animals and provide opportunity to more Ugandans to see these animals without necessarily visiting the park.